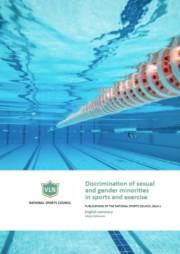 The research objective of this study was to describe, primarily with quantitative research data, perceived discrimination on the grounds of sexual orientation, gender identity and gender expression and its effects, as experienced by LGBTI sports practitioners in the contexts of competitive and recreational sports, and in physical education (PE) in schools.

The research questions were:

VLN 2014:1 Discrimination of sexual and gender minorities in sports and exercise (PDF, 851 KB)